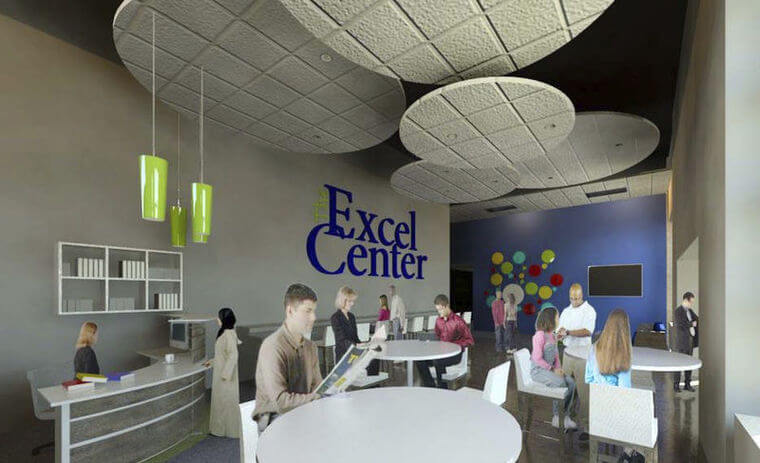 Goodwill Industries of Michiana and Ancon Construction are excited to announce that construction is underway at The Excel Center – South Bend.  The Excel Center – South Bend, which is operated by Goodwill LEADS, INC, will provide adults the opportunity and support to earn a high school diploma and pursue post-secondary education while developing career paths that offer greater employment and career growth opportunities.

The project, designed by MPA Architects and built by Ancon Construction, will be overseen by Project Manager Doug VonGunten and Field Superintendent Mike Crawford.  The renovation project consists of approximately 22,000 sqft and features numerous classrooms, large break room, lounges, offices, and drop-in center.  The project is estimated to be complete at the end of September.  According to the website www.excelatgoodwill.org, 260 students have already applied.

Champagne Metals and Ancon Construction are excited to begin a 77,000 sqft building addition in Middlebury. Project Manager Cullen Stanger and Field Superintendent Justin McDonald will oversee the project which will be complete in late December.  The project will allow for more additional warehouse and production spaces.

St Dominic’s Catholic Church and Ancon Construction are excited to announce a building expansion in Bremen.  The Parish held a groundbreaking ceremony on Sunday June 28th on site with song, scripture, and blessing of the site.

The project, designed and built by Ancon, is expected to be complete by early November and will be overseen by Designer Matthew VanSoest, Project Manager Doug VonGunten, and Field Superintendent Chris Cormican.

The building expansion includes a lobby, restrooms, conference room, chapel, and information center.  “Our team carefully worked with the building committee in understanding current and future ministry needs of the parish and effectively designed the building project to respond to a variety of events and spatial uses.  Strategic design also allowed the new addition to match the architecture, form, and exterior building materials of the unique nonagon shaped church that was built in the 1960’s,” commented Ancon Designer Matthew VanSoest.

“Both Matt and Doug were true partners in our efforts to secure an affordable plan while sacrificing very little in achieving our original objectives.  When suggestions and ideas were discussed a range of costs were made readily available for our consideration.  We were very impressed with Matt taking the extra time to study and understand our specific facility needs in keeping with our Catholic Culture. Several of his creative ideas were adopted in our plans for the chapel and gathering space to enhance our primary ministerial goals.”

Evil Czech Brewery – Mishawaka and Ancon have partnered on an outdoor beer garden on the west side of the building.  The project, which is being overseen by Project Manager Seth Hartman and Foreman Ricky Waterman, is estimated to be complete mid-June.

The project entails a deck with a perimeter raw steel column and metal panel privacy wall system.  The fencing will be adorned with an artwork mural – similar to the artwork found inside the building.  A built in barbecue is being constructed.  The project also preserved a large existing tree as a sustainable move as well as for shading purposes for patrons.

Evil Czech Brewery was awarded the 2014 ABC Award of Excellence in the Renovation-Non Historical Category.  Architect and General Contractor Ancon Construction partnered with George and Tammy Pesek in the transformation of an abandoned building into a state of the art on site brewery/pub.  The establishment has been a successful venue in its one year of operation thus far. 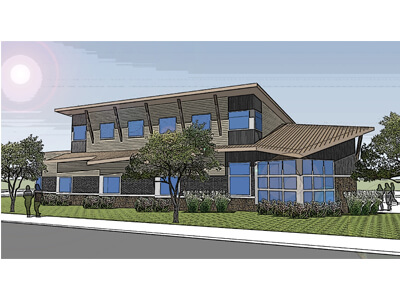 The new credit union responds to the “new age” of banking design.  The business center and lobby is based on the dialogue banking concept – following the examples of new retail and hospitality environments.  A teller line is replaced with pods or stations which allow for a relaxed, welcoming setting.  Furthermore, customer service is improved through a more transparent interaction between tellers and customers.  A two story lobby with elevated display nook, stone feature wall, and soft seating will make the space feel like a living room.  Other programmatic spaces include offices, staff lounge, support spaces, and work rooms.  The second floor will feature executive offices and conference room overlooking the lobby below.

The contemporary architectural theme will be featured on the exterior of the building with cultured stone, brick, cedar beams, and two variations of architectural metal.

“Ancon has been very responsive to our needs and wants for our new main office.  Their ideas and concerns are much more than I expected.  They have gone above and beyond in the planning of our new endeavor,” states CEO/President Jonette Thomson.